Everything in Chicago is stretched–even churches.  My eye was caught by this building as I looked to cross a street in Chicago and saw the steeple on top of this skyscraper a couple blocks down.  I was very confused at first, trying to figure out why an office building had a steeple on top of it.  Then I saw the name of the church, First United Methodist Church, carved into the side of the building.  The only other indication on the exterior visible from a distance that suggested the religious use of the interior was the doorway.

This building is also known as the Chicago Temple.  The congregation was founded in 1831 and has been worshiping at this site since 1838.  The current building was built in 1924 and has 23 floors.

One of my souvenirs from Chicago was the book “City of the Century” by Donald L. Miller, which describes the history of Chicago up to the 1893 World’s Fair.  So it doesn’t talk about the building of this church building, but it does describe the building of the Auditorium–Chicago’s multipurpose Opera House.  The book notes “there was no government support of the arts in the United States, so the Auditorium would have to pay for itself” (361).  As a result the theater was enclosed in a office/hotel complex.

It seemed like there might have been similar thinking in the design of this church building–as real estate was expensive downtown, covering the church with office space could help it afford its location.  However, if that is why the building is mixed-use, it was not inspired by the Auditorium, which was built in the late 1880s.  According the history page of the church’s website, there has been a multipurpose church building on this site since 1858.  The first one was a 4-story structure with stores and businesses on the first two floors and the church above. 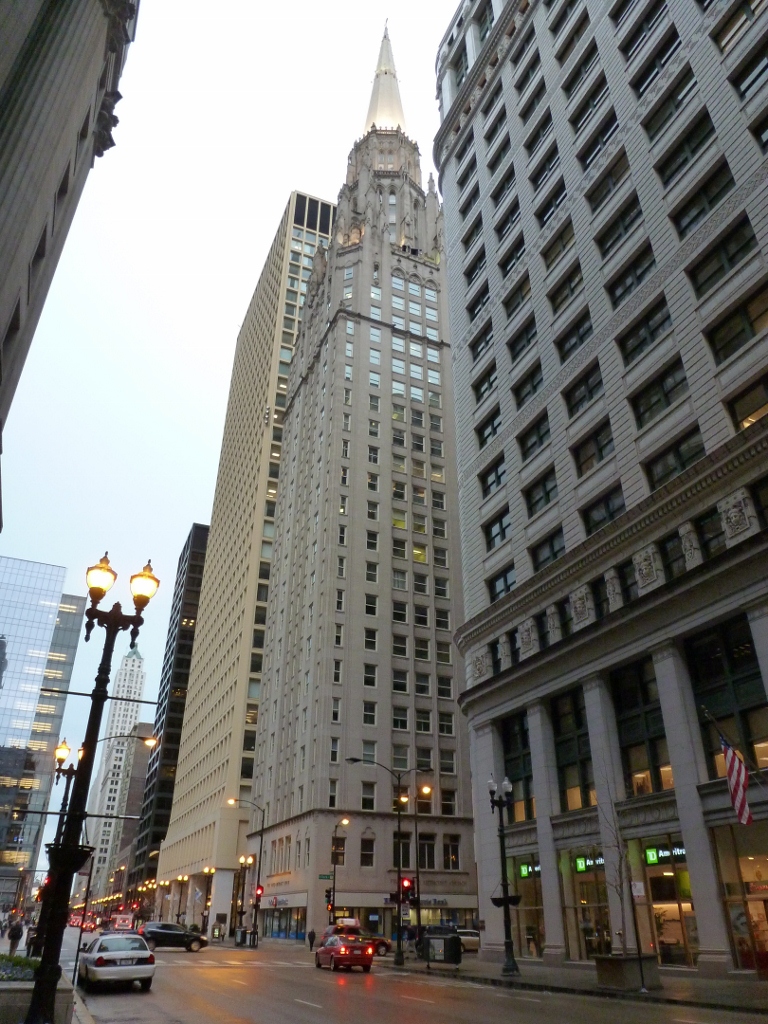 The new building has a two-story sanctuary on the first floor.  Accounts differ as to how many this can hold (500, 1000, 1200 people).  The second floor has another smaller sanctuary.  Floors three and four hold the accessory rooms–classrooms, meeting rooms, etc.  The parson’s house is also located in the building.  The remaining floors are office space.  The crowning jewel, is a small chapel underneath the steeple.

I regret that I did not take the time to stop and investigate whether I could explore the inside of the building.  As I was focused on a specific task when I came upon the building, I did not even think about trying to see inside.  If you are interested, I found a YouTube video that shows what I take to be the first floor sanctuary and the small chapel under the steeple. 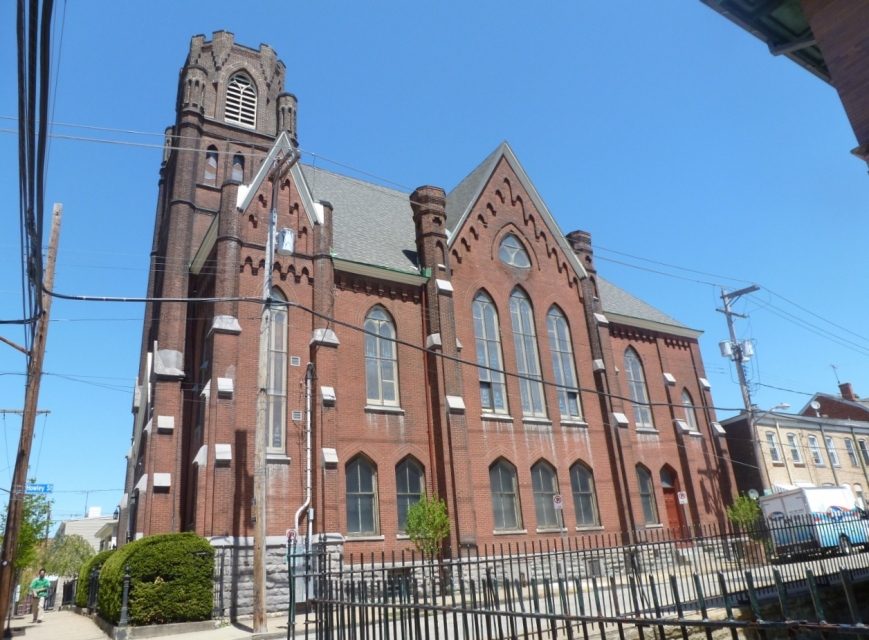 This little gem in Pittsburgh’s Lawrenceville neighborhood is full of surprises.  In the 20-some years I’ve been passing through this area, I never noticed the building.  It was brought to my attention a few years ago when I began researching adapted church buildings in Pittsburgh.  If you are in the nearby vicinity, the building blends into its surroundings.  But from other parts of the city it stands out (see 31st Street Bridge, Bloomfield Bridge, Busway Bridges: Herron Street, Busway Bridges: 28th Street).  It is also visible standing out along the ridge in the second photo in my Washington’s Crossing Bridge post.

There are two characteristics that make it stand out from a distance.  The first is its location at the highest point on 40th Street in Lawrenceville. 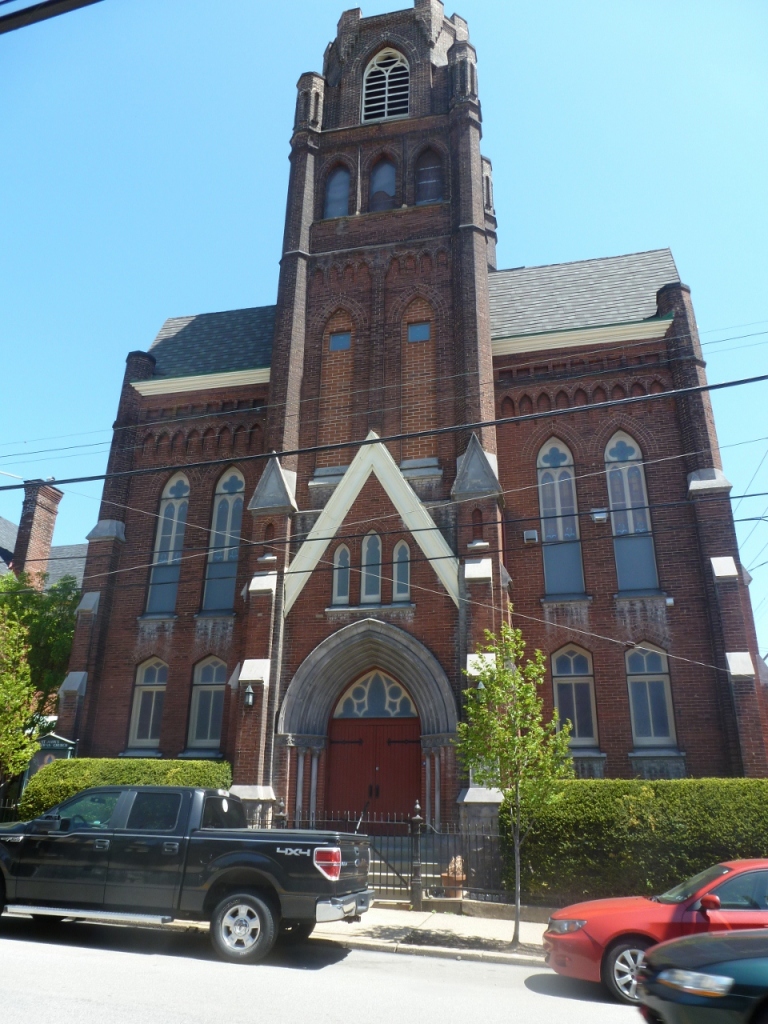 The second characteristic is one of the most intriguing parts of this building: the fellowship hall is at ground level and the sanctuary is above, reached by a flight of stairs.  This is the only church building I have been in where the sanctuary is a full flight of stairs above ground level.  I’m very curious to know if there are any others–please share, if you’ve come across one!

The building was built in 1896-97 for the German Evangelical Lutheran St. John’s Congregation, which later became St. John’s German Evangelical Lutheran Church.  In 2002, the congregation merged with St. Andrew’s Lutheran Church and closed the doors on this location.  A real estate agent purchased the property and prepped it for conversion into 3 condominiums–one unit each for the sanctuary, fellowship hall, and parish house–before the current owners purchased the property and completed most of the rehab work creating the Choir Loft Condominiums.  (A side note that may be of interest is that the current owners considered purchasing the building that is now the Union Project but chose this one instead.)

The owner reported that the building was essentially empty for nearly 2 years before he acquired it.  The floors were in bad condition–the pews had been ripped out, tearing the sanctuary’s floor, and the choir loft’s floor was completely missing.  He said his goal in renovating the building was to “not destroy the architecture and the interior.  We wanted it to feel like a church still because it is a church.”

Having gotten a tour of the interior of the sanctuary unit, I’d say they succeeded in this goal.  The former sanctuary space is an open loft configuration with hardwood floors.  The raised steps for the altar area were kept and made into the kitchen.  The choir loft remained open and served as the bedroom.  The gorgeous stain glass windows were also intact.  While I was there on a winter evening after sunset, I loved the description of how the colored pattern from the stain glass gradually moves across the floor like a very colorful sundial.  My other favorite part was that there was still a bell in the tower, which the owner rang for me.  While inside the sound was muffled, it sounded like it could have woken sleeping neighbors.

As I was walking down Penn Avenue this week, I stopped to take this picture before it was gone forever.  Pittsburgh is joining the ranks of cities that use multispace meter systems.  The city’s individual parking meters are slowly disappearing as they are replaced by the multispace system.  Yet even before the transition began, Pittsburgh’s parking meters were suffering.  A complete row of intact meters marching off into the distance, such as those pictured, has been a rare sight in the city for years.  Usually there are at least a few with their heads chopped off or their stalks bent.  On close inspection, this row did have graffiti on many of the heads and at least one meter was out of order.  However, in the spring sunshine, these meters looked almost pristine with their gold heads gleaming.

This week was an exciting one for bike infrastructure in the city of Pittsburgh.  The first green bike lane was installed.  I’ve been waiting for this for two years and it surpassed my expectations! (I am sure others, such as the city’s Bike Planner who brought the project about, waited for this moment much longer me.)

The road here used to be three lanes (left-turn only and two straight), but the right lane was rarely used because just after the next intersection it merges into the left lane.  The lines for the green bike lane were painted late last fall, but I assume the green wasn’t laid then due to weather issues.  As I passed through this area regularly on the bus, I noticed that there were some motorists who either ignored the solid line running along the side and down the middle of the lane or didn’t notice them.  This lane did not have the bike symbol in it yet, so I motorists being a little confused here.  However, in other parts of the city, I have often witnessed cars driving along in clearly designated bike lanes (meaning there are signs posted and the bike symbol painted in the road).  Soon I hope to be able to report that motorists recognize they don’t belong where the green paint is, giving bikers a clearly recognized portion of the road.

One of the really neat things about this bike lane is that it stands out from quite a distance.  I was initially skeptical when I heard it was going to be a green lane–I pictured a grass or forest green color–but this neon green is very eye catching.

I am trying out different layouts for my blog.  Please let me know what you think of the current option.