The Greenfield Bridge, formerly known as the Beechwood Boulevard Bridge, was originally built in 1922, demolished in 2015, rebuilt in 2017, and repaired in 2020. It was a classic case of waiting until the bridge was falling down before replacing it. To increase the lifespan of the original bridge, a second bridge was built underneath, and a net installed as early as the late 1980s to protect cars on the freeway below from the falling debris.

Yet it remained in that deteriorating condition for decades before being imploded in a grand ceremony between Christmas and New Year’s Eve 2015. The freeway was covered with tons of dirt, the bridge dropped onto this pile, and the debris cleared away before the highway was needed again for regular commuting. Many people (myself and my family included) stationed themselves on either hillside to watch. We picked a distant vantage point in Schenley Park where we had a great view of the dust cloud that resulted from the demolition.

Another grand ribbon cutting ceremony took place when the new bridge reopened in 2017. A part of the reason for celebration was that, similar to the rebuilding of Heth’s Run Bridge, the historical decorative elements of the bridge were restored or reinstated. The new fencing on the bridge also aimed for a more decorative feel compared to the previous cage-like fencing.

After all the ceremonies and splash around the new bridge, I was surprised to receive a press release three years later announcing that the bridge would be closed for a month to undergo repaving and other repairs. On the one hand, it was nice to see that a bridge was undergoing maintenance instead of being left to fall to pieces before being replaced, but three years seemed early to need this kind of maintenance. According to the Post-Gazette, the repairs were for issues identified in the final inspection before the 2017 reopening. These issues threatened to significantly shorten the projected 50-year life span if unaddressed. Now that those issues have been resolved, I assume it will be at least 50 years before the next press release about repair or renovation for this bridge. 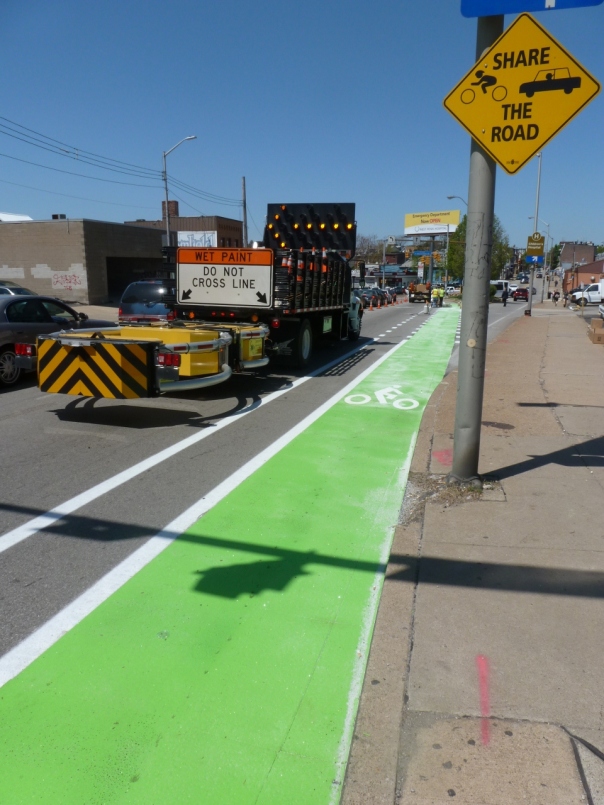 This week was an exciting one for bike infrastructure in the city of Pittsburgh.  The first green bike lane was installed.  I’ve been waiting for this for two years and it surpassed my expectations! (I am sure others, such as the city’s Bike Planner who brought the project about, waited for this moment much longer me.)

The road here used to be three lanes (left-turn only and two straight), but the right lane was rarely used because just after the next intersection it merges into the left lane.  The lines for the green bike lane were painted late last fall, but I assume the green wasn’t laid then due to weather issues.  As I passed through this area regularly on the bus, I noticed that there were some motorists who either ignored the solid line running along the side and down the middle of the lane or didn’t notice them.  This lane did not have the bike symbol in it yet, so I motorists being a little confused here.  However, in other parts of the city, I have often witnessed cars driving along in clearly designated bike lanes (meaning there are signs posted and the bike symbol painted in the road).  Soon I hope to be able to report that motorists recognize they don’t belong where the green paint is, giving bikers a clearly recognized portion of the road. 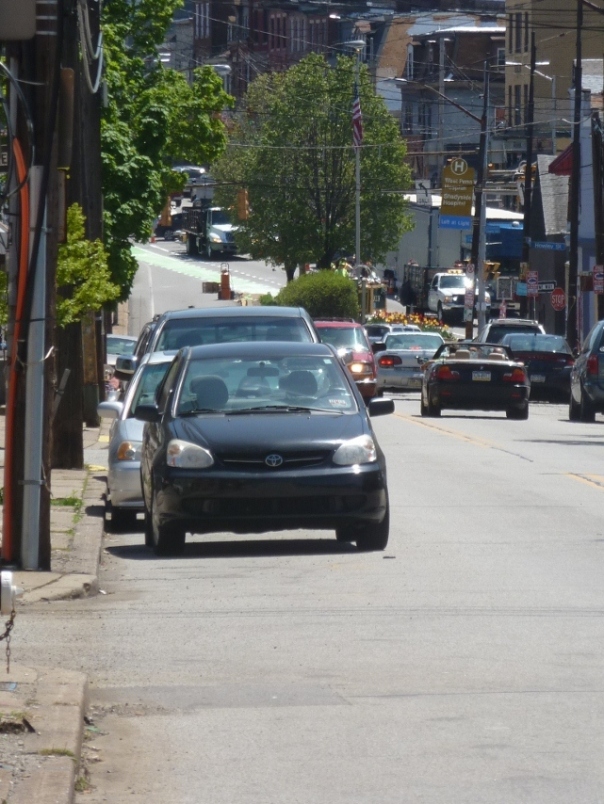 One of the really neat things about this bike lane is that it stands out from quite a distance.  I was initially skeptical when I heard it was going to be a green lane–I pictured a grass or forest green color–but this neon green is very eye catching.

The Southwark Bridge had the most, or at least slowest, vehicular traffic of any of the bridges I walked in London.  It was also the only one with a painted bike lane.  I believe this lane is part of London’s Cycle Superhighway system.  These bike lanes are intended to make bike travel to central London from the surrounding areas easier (see website).  I really liked the bright blue color of these lanes.  It is highly visible and makes it quite clear this is not a place for cars.  Of course I am sure it costs a lot to paint miles of bike lanes solid. 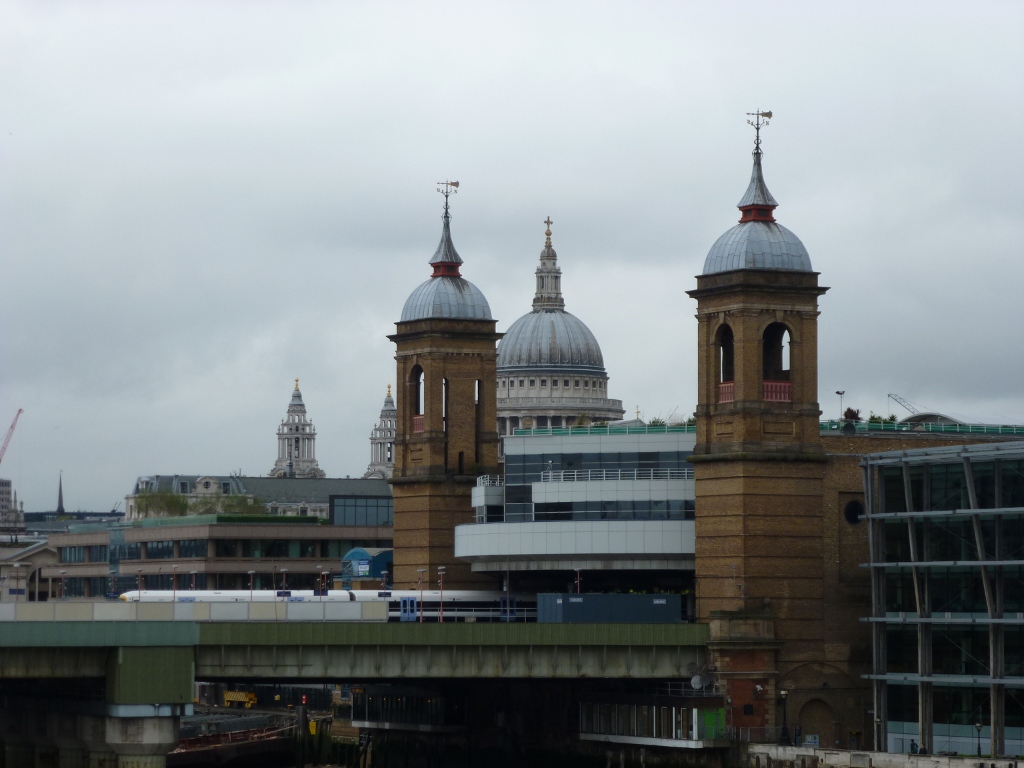 The little domes on this building had been visible to me long before I saw the rest of the building.  I was in anticipation for several days to learn what it was.  I assumed it would be something really interesting like a church built by Eastern European immigrants, in which case its prominent location on the waterfront would led to a fascinating story, I’m sure.  Consequently I was a little disappointed to learn that it was only a train station.  (Note: I learned what the building was while on the Southwark Bridge, but the view above was taken from the London Bridge on the other side of the station from Southward Bridge.)

In this view upstream, the Millennium Bridge, which was so photogenic from the other angles (see Aug 2 post), becomes invisible against the background of the Blackfriar’s Rail Station spanning the Thames (see Blackfriar’s Bridge post).