There is a proposal in Pittsburgh to introduce a new feature to its riverfronts: swings.  I am excited about this possibility as a swing lover and as someone who wants to see more welcoming and engaging spaces along Pittsburgh’s rivers.  One of the inspirations for this idea are swings found in Cincinnati’s riverfront park.  Last summer, I happened upon that park in a search for bridges by Roebling.  On an ordinary summer evening, this enormous riverfront park was filled with people of all ages enjoying the various activities from walking paths to playgrounds to interactive art installations. 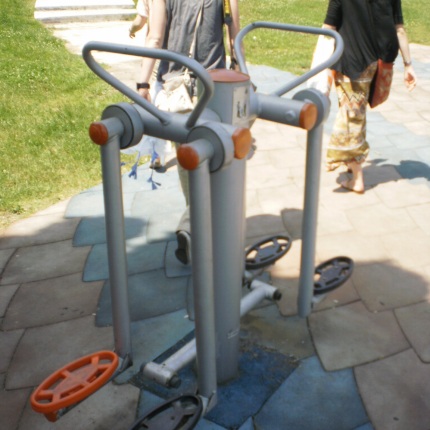 Previously, when walking around Istanbul, I experienced jealousy at seeing the number of parks with adult exercise equipment installed.  This sort of acknowledgement that adults enjoy playing outdoors as much as children seemed lacking in parks across the United States.  Cincinnati’s park showed me that inviting adults to play outside is embraced in some parts of our country.

Pittsburgh has kayak and bike rentals for adults to play outside.  The walking trails, Fountain at the Point, and Watersteps attract people to enjoy the outdoors and the rivers.  However, if this swing proposal pans out, Pittsburgh may move up into the next tier of engaging outdoor spaces with the introduction of free play equipment for adults on par with Cincinnati and Istanbul. 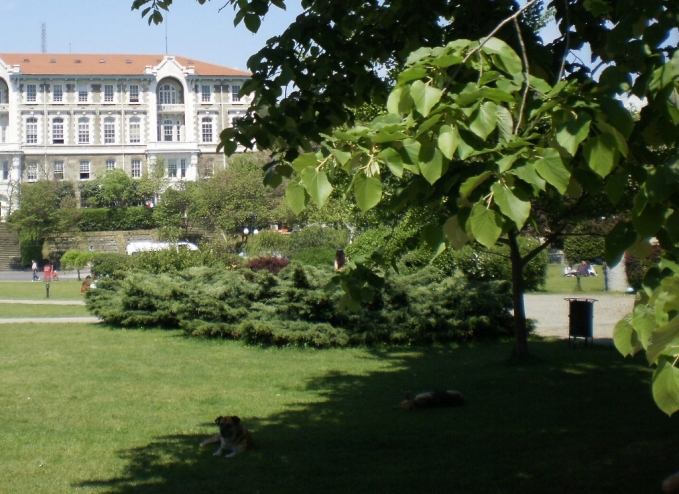 Not being a dog person, I have been fascinated by different dog behaviors and treatment that I have seen in traveling.  In New York City, I was surprised to see people bring their pet dogs onto public transit, both on the metro and on the bus.  I wasn’t sure if this behavior was like eating on the buses in Pittsburgh–it’s not permitted, yet people do it anyway–or if pets are allowed on public transportation in NYC.  It also seemed unusual to me that most of the dogs I saw were small.  But then, thinking it through, I decided it made sense as if you live in a stereotypical tiny New York apartment, you wouldn’t have the space to keep a big dog.

In Pittsburgh, dogs seem to be more like what you would find in suburban areas.  They are often big and they tend to bark a lot and strain toward people they pass on the street.  After coming back from New York City, I realized that you don’t see dogs in downtown Pittsburgh.  However, as more people have moved downtown, dogs on the streets downtown have become much more common.  Including ones that are pushed around in what look like baby strollers, but given how some people feel about pets, they might have been strollers designed for dogs.

Istanbul dogs were quite different from the average dog in America.  I believe most of them were strays, but they appeared to be quite self-sufficient (such as the ones in the photo above).  They minded their own business and let everyone around go about their business.  It was quite refreshing to me to see numerous dogs that did not feel the need to bark their heads off just because someone was walking by.  I regret that I did not get a picture of the most notable dog I passed.  He had a human companion, but no leash, instead he was decked out in sunglasses and other bling like mardi gras beads.

While talking with someone recently, we discovered we shared a seemingly rare love of maps.  Maps are truly awesome and useful tools and not just for figuring out how to get from one place to another.  Maps provide insight into what a place looks like, giving clues about the layout and geography of a place you’ve never been.  Street names and other labels can hint at the history of the place.  Historical maps show what a place looked like in times past.

I have used maps several times to help me with writing my blog and there are many more times when I should have gone to a map first. As I mentioned in the first Heth’s Run Bridge post, the G.M. Hopkins maps on Historic Pittsburgh are probably my favorite resource for Pittsburgh.  Heth’s Run Bridge presented many puzzles that the maps helped me understand.  I realized yesterday that I probably should have gone to these maps first when wanting to figure out which bridge remnant I saw from the Fort Duquesne Bridge (see June 19’s post).  While writing that post, I did a search on the internet, but came up with nothing.  The G.M. Hopkins maps came to the rescue, although there are two possibilities for which bridge the remnant belonged to.  The first possibility I found on the 1900 map.  This one was called the Union Bridge.  By 1929, the Union Bridge was gone and another bridge connected the Point to the North Side.  This one was called Manchester Bridge.  This bridge was demolished in 1970, by which time the Fort Duquesne Bridge was built (see June 19th post).  I made a few other discoveries about Pittsburgh while looking at the 1929 map.  First, Penn and Liberty avenues used to come straight through to Water Road which ran along the northern shore of the Monongahela River.  Today these avenues stop much further inland.  The second major discovery was that Point Park already existed in 1929.  It was significantly smaller than it is today, but it is there.

Google Maps helped me with identify the buildings near Lambeth Bridge (see June 28th post) that I didn’t take the time to stop and investigate while I was walking the bridge.  Several of the buildings I was able to identify from labels that Google Maps conveniently placed on the map.  The Parliament View Apartments weren’t labeled, but using Google Maps’s other wonderful feature–Street View–I was able to find a sign on the building identifying it.

The image leading this post is of another highly convenient map.  On my recent trip to Cleveland, I arrived Downtown 2 hours before the person I was visiting finished work.  We arranged to meet at their place of work, but I was only familiar with two or three of the streets in downtown Cleveland, and the meeting place wasn’t on any of them.  I had just decided to use my skills of logic to find it (which would have been feasible in this case as one of the cross streets was a numbered street and the other was called Lakeside) when I came across this map on a street corner.  It turns out that these maps are posted regularly around downtown Cleveland, which I thought was very considerate of the city.  It made the city feel like it welcomed visitors with open arms, engaging them in being engaged in the city.  Even though I had a plan for finding where I was going without a map, I prefer being safe rather than sorry, so I took the easy way out and used the map to figure out where I was supposed to end up.  I also used it to plot out how I could spend the time I had until my friend got out of work to cross at least one of Cleveland’s bridges over the river Cuyahoga.  I ended up getting distracted from this goal, but that is a story for another day….(see July 9 post)….

I decided it was time to add some variety to my bridges post.  Last year I spent two weeks in Istanbul.  While I was not as absorbed in my bridges quest at that time, I found that thinking about the bridges in Pittsburgh and London caused me to reflect on the bridges in Istanbul.  Considering how much water there is in Istanbul, there are very few bridges.  I can only recall seeing three: the Galata Bridge, Ataturk Bridge, and the Bosphorus Bridge.  (Apparently my memory is a little rusty as I just looked up a map of Istanbul which shows there were four bridges that I would have seen, this obviously reflects the fact that I was not in my bridges phase at that time.)  Of these four bridges, I only crossed the Galata Bridge, but I walked under the Bosphorus Bridge and took some pictures of it.

The Galata and Bosphorus bridges are very different in age and use.  There has been a Galata Bridge since the middle of the 19th century and a bridge over the Golden Horn (the body of water the Galata Bridge spans) since at least the 6th century.  The Galata Bridge has many uses.  There are wide sidewalks that accommodate pedestrians, three lanes in each direction for cars, and tracks down the middle of the bridge for the trams.  While I worked very hard not to get any of them in the picture above, the bridge is usually lined with fisherman and street vendors sell freshly caught and cooked fish.  Below the street deck are numerous restaurants.  One day, we had fish sandwiches for lunch at one of these, which were surprisingly good (I’m not much of a fish fan).  The line of one of the fisherman on the street deck above can be seen in my picture from the restaurant.  The Galata Bridge not only provides access between two points, but also provides people access to their livelihoods and to decent meals.  This shows that bridges do not have to be just about funneling traffic from one place to another; they can be a lively and interactive space in the city. 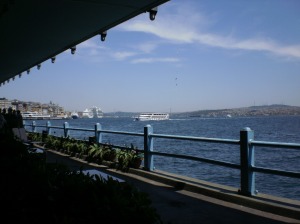 On the other hand, the Bosphorus Bridge, built in the 1970s as the first bridge to span the Bosphorus strait, is purely a funnel (as far as I observed).  It looks like it could be in New York or almost any other US city.  The purpose of the Bosphorus Bridge is like that of most of Pittsburgh’s river bridges–to provide vehicular access across a body of water. 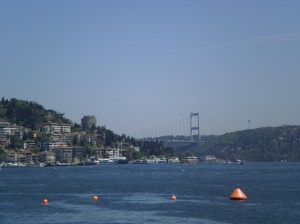