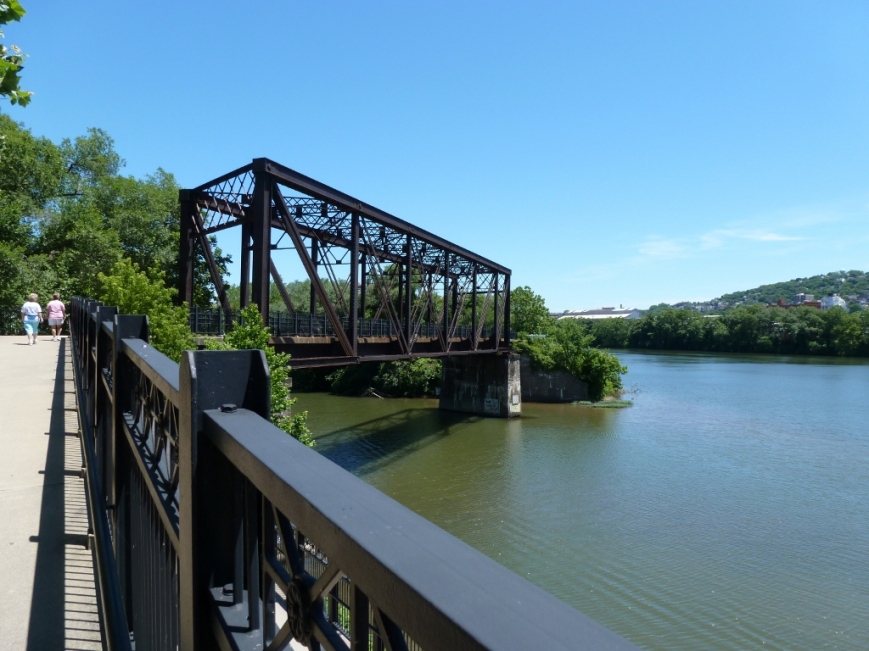 This is the bridge that I missed when identifying the river bridges to cross on GoogleEarth.  I missed it because it doesn’t cross the entire width of the Allegheny River.  About 2.5 miles upriver from Downtown Pittsburgh is Herr’s Island, also known as Washington’s Landing.  The name Washington’s Landing refers to the story that this was where George Washington spent the night after a crossing of the Allegheny River during which he fell into the river.  (The folk song “The Forks of the Ohio” describes the incident.)  Herr’s Island refers to one of the original landowners of the island, Benjamin Herr.

One of the names of this bridge is Herr’s Island Railroad Bridge.  While PGHbridges.com lists multiple names for the bridge, none of them refer to the new use of the bridge as a pedestrian bridge.  The bridge connects the northern shore of the Allegheny with Herr’s Island and I image was very well used while the island was covered with industry.  Now is it a very pleasant pedestrian bridge connecting the northern branch of the Three Rivers Heritage Trail with Herr’s Island, which now features a swanky residential area. 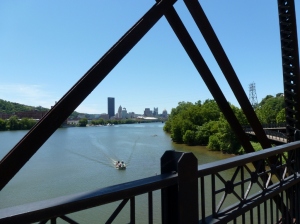 The view upstream shows the little stretch of the Allegheny that separates the northern shore from Herr’s Island, while the downstream view captures downtown.

At the Herr’s Island end of the bridge is a nice look-out space featuring this compass with the three rivers.  While this part is nice and seems to welcome the public, I always feel very awkward as I continue on the trail along Herr’s Island.  The way the island was developed, it feel like it’s a private, gated community and people like me who use the trail but don’t live there are interlopers and trespassers.