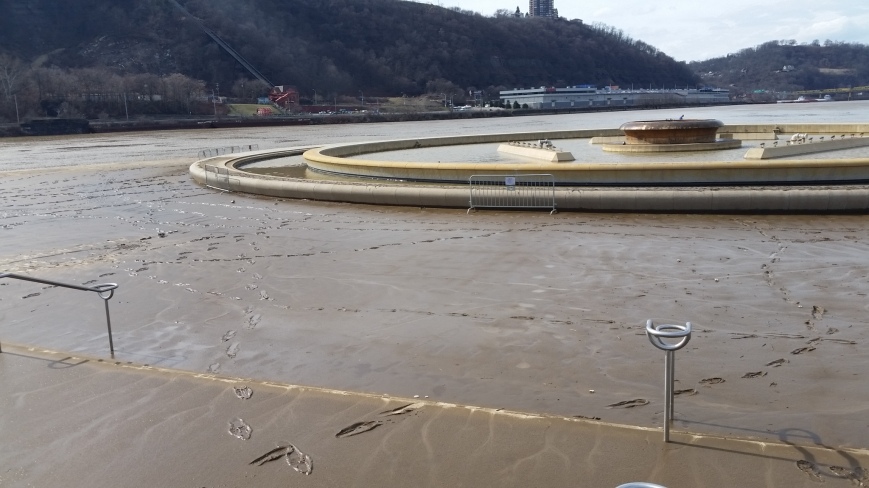 Silt deposit after the flooding rivers receded enough to uncover the fountain at The Point (February 20, 2018)

Over the last few years, I have developed a habit of “checking on the rivers” regularly by crossing them on my way to various activities or eating my lunch on their shores.  This habit started as a way to get a break from the office and clear my mind.  After having read several books by John Muir and James Fennimore Cooper, I found a deeper meaning in these “check-ups”.  Both authors wrote wonderfully descriptive passages of nature scenes and kayaking on rivers and oceans.  While crossing the Allegheny one day, something about the view recalled some of these passages.  I was filled with a sense of wonder and awe that this river running through the heart of our city is still the same force of nature described by Muir and Cooper in other locations, despite the man-made attempts at controlling it through dams and bridges and concrete lining the shores.

This winter, the weather patterns are reinforcing the power of nature as exhibited by the rivers.  During our cold snap over MLK Jr Day weekend, the rivers froze.  The Allegheny had some pockets of open water surrounded by thick ice, but the Monongahela froze all the way across.  Commercial traffic on the Monongahela started up again on Tuesday, breaking a path through the ice along the shipping lane, but on the coldest days that week, the channel remained clogged with chunks of ice that appeared to be refreezing together between shipments.  As the weather warmed up slightly, the rest of the river remained frozen, but the shipping lane cleared of ice, until it got cold again and refroze.

Marveling at the sight of the frozen rivers, I found myself beset by the feeling that impels people to walk across frozen bodies of water without knowing whether or not the ice is actually thick enough to hold you.

Since then, an extended period of unseasonably high temperatures and record pushing rainfall has brought on over a week of flooding and high water on the rivers. The fountain at The Point is supposed to have gone underwater at least twice in that time. Multiple roads and ramps downtown have been forced to close off and on due to high water. The highest I saw the water, a few hours before it’s first peak, it appeared to be within a few feet of the base of PNC Park.

Every time I pass by one or the other, I compare the water height against the familiar features. On the Monongahela, several of the trees lining the shore have been standing in water for days. I wonder how long they will hold out before they join the other logs floating down the middle of the swollen torrent. On the Allegheny, the trails on both sides of the river are either more or less under water. As I look down from the high perch of the bridges or the sidewalk along Fort Duquesne Blvd, I am amazed at how effortless it seems the water just slips over the edge of the trail. Whenever I’ve walked that same path, the water always seemed far below.

As I spent my lunch breaks this week running from one to another of the rivers to check on the effects of all this water, I laughed at my eager curiosity to explore these flooded shores compared to the terror I experienced as a kid when my Dad took my brother and I along on similar exploration of the flooded Delaware River. My heart clutched as the waters of the Delaware bubbled and gurgled inches from the road we traveled. When we pulled off to park and watch the water a uniformed personnel directed us to move to higher ground. That area was being evacuated due to the rupture of an ice dam upstream that released a 50 ft high wall of water expected to hit that part in 10-20 minutes. My Dad got us back in the car and headed up the road again at what seemed to me to be a snail’s pace. My eyes detected signs of the water being even closer to the level of the road as we went back the way we came. I only breathed freely again, when we reached a lookout off the Appalachian Trail hundreds of feet above the bed of the river. We waited and watched for a long time, but never saw the promised wall of water.

Ever since that day, my mind has contemplated the idea of a wall of water traveling down a river with interest trying to picture and understand how that would work. The extreme variations in the heights of Pittsburgh’s three rivers the last couple weeks are the closest real-life examples I’ve had of massive amounts of extra water flowing downriver. My curiosity is teased by this, impelling me to explore, urging me to go on, go closer. Yet, the fear of the water’s power still remains tucked up in the corners of my mind. It mingled with wonder and awe as I stood at the edge of the silt deposited by the rivers around the fountain at The Point.