Baum Boulevard and Centre Ave run parallel along the border of Pittsburgh’s Shadyside and Bloomfield neighborhoods and are arteries that help people move from downtown and Oakland to East Liberty and other East End neighborhoods.  The Baum-Centre corridor is currently receiving a lot of attention from the perspective of the development of the city.  There is even a community group called the Baum-Centre Initiative made up of representatives from other groups along the corridor.  Their goal is to work together to promote development along the corridor that is beneficial and satisfactory to their respective groups and communities.

This area is attracting interest in part because of its arterial activity, but also because Baum used to be the car dealership district.  Most of the dealerships have closed their locations leaving behind many empty buildings.  Contrary to this disinvestment, Centre Ave hosts one of the UPMC hospitals and an urgent care center was recently added.  From what I’ve picked up, UPMC is working to expand in this area.

The large building between Centre and Baum last housed a party/costume supply store, but I image most of the building was sitting empty.  For about the last year, it has been under redevelopment.  The rumor I have heard is that something related to UPMC is going into the space.

I also heard that UPMC wants to build a parking lot for its employees in this area.  I couldn’t picture exactly where it was to be placed from the description I heard, but I wonder if it is this empty lot off of Baum Boulevard.

Outside of the developments going on near them, my impression of these two bridges is that they are quite ugly.  I am glad that except for when I walked them for my project, I’m in a bus when crossing Centre Avenue’s bridge and in a car when crossing Baum Boulevard’s bridge.  Now that I mention it, that’s how I felt about most of the bridges across the busway I’ve walked (except for the new pedestrian bridge, see July 26 post).  Though I haven’t written the posts for all of them yet, at this point I have walked all the bridges over the busway between Penn Avenue and the Bloomfield Bridge. 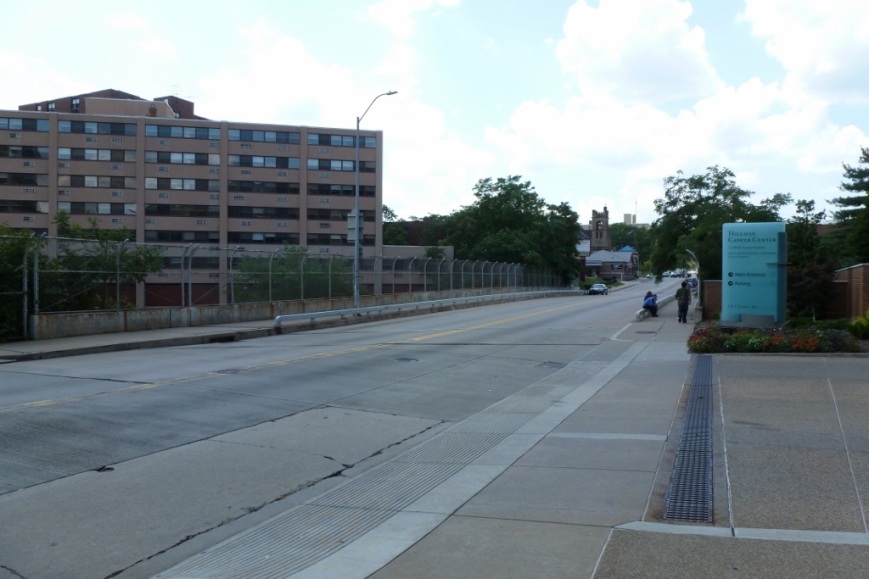 My favorite part about walking these two bridges was the view of Bloomfield/Lawrenceville from the Baum Boulevard Bridge.  This view captures two of Bloomfield’s churches (both currently active) with Lawrenceville’s Childrens Hospital sandwiched between them.